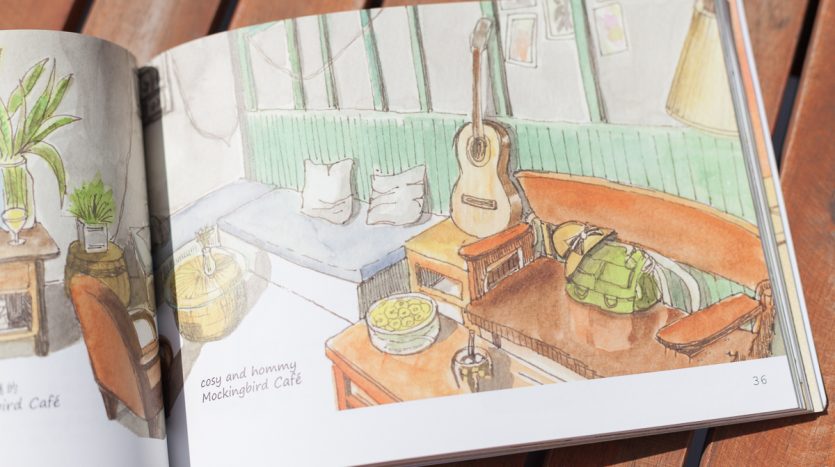 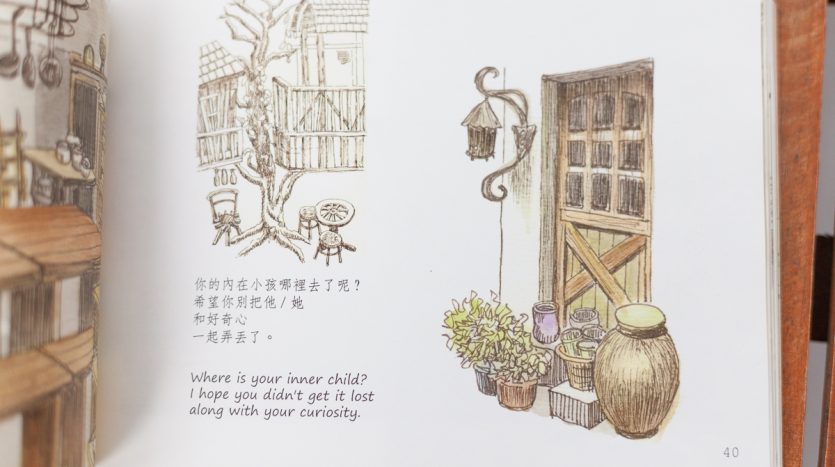 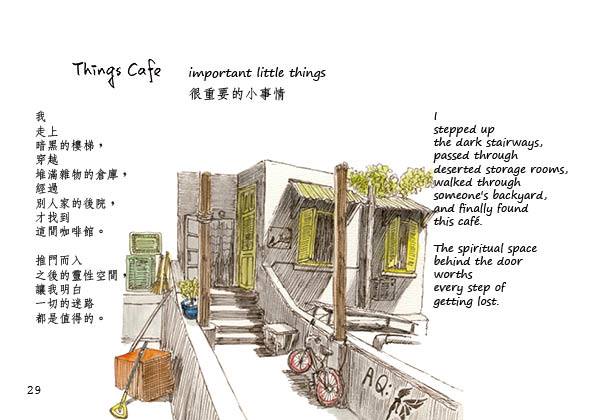 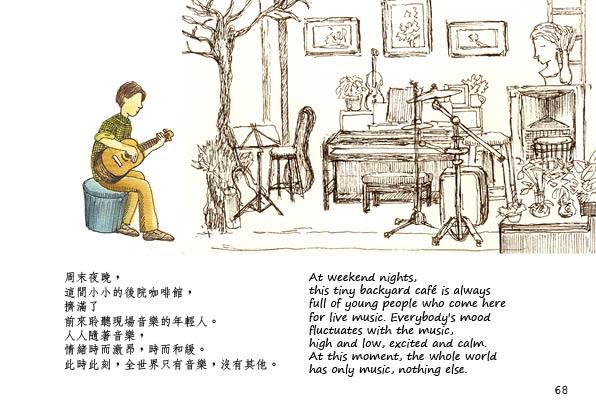 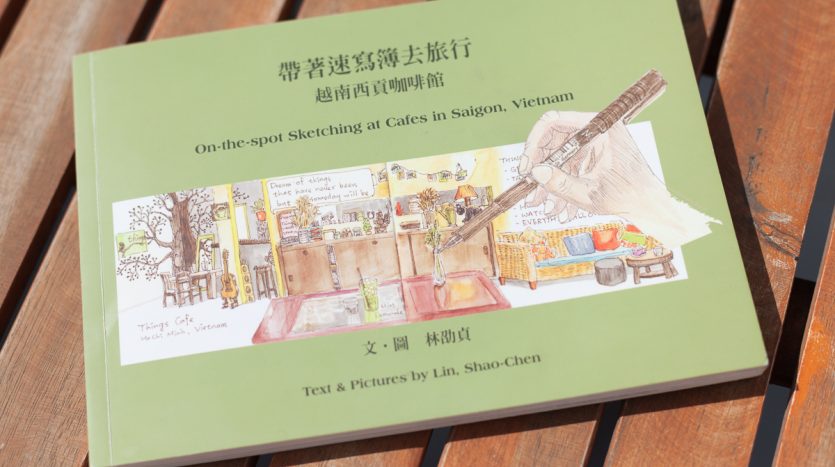 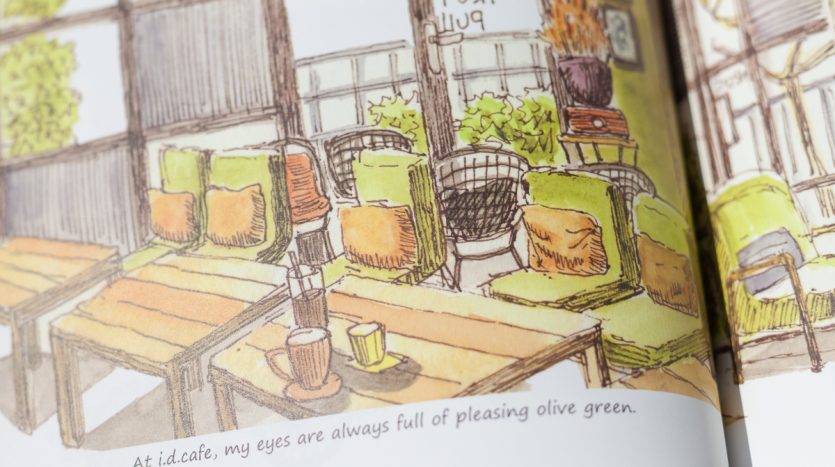 In Shao-Chen Lin’s new sketchbook, On-the-spot Sketching at Cafes in Saigon, Vietnam, the southern metropolis is defined by its most charming aspect: a robust coffee culture that permeates every corner of the city, from weathered downtown apartments to hidden hẻms in the outskirts of District 3. 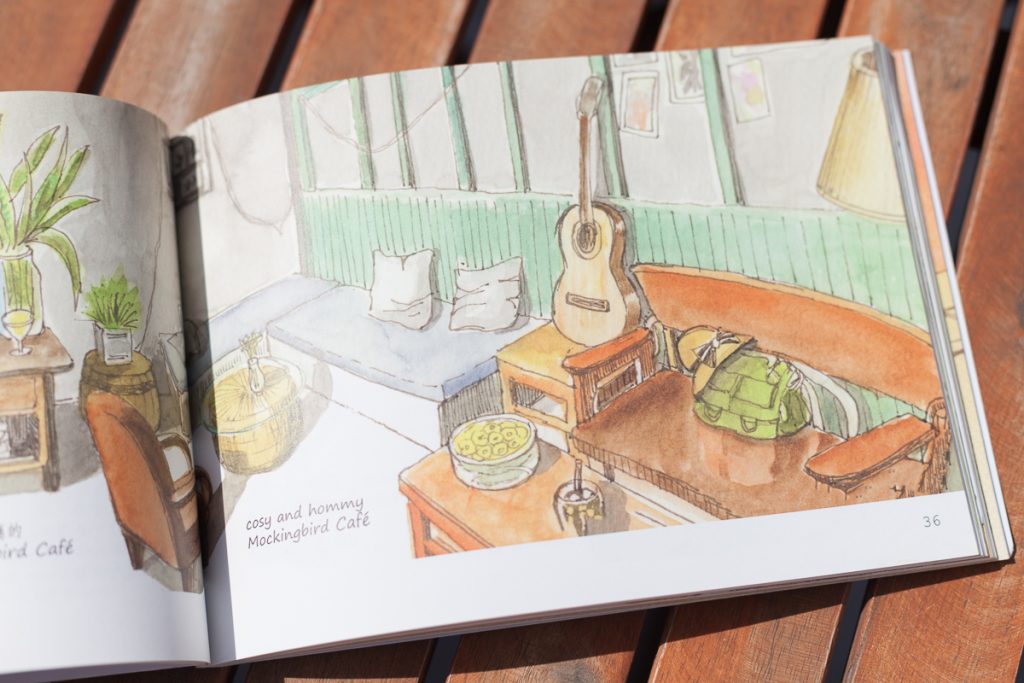 There’s a special selection of Vietnamese words that, over time, have somehow transcended their original grammatical function to take on an entire cultural connotation within themselves. They’re words like café, eat, cinema, play – or their respective local counterparts, cà-phê, ăn, xi-nê and chơi – which, when combined with “go”, or đi in Vietnamese, make up most of the city’s favorite pastimes.

For middle-age uncles and retirees, a Saigon morning would be lackluster without a small glass of cà phê sữa đá, complete with a phin filter and freshly printed newspaper. At lunchtime, under the canopy of tamarind trees, throngs of office workers congregate at street corners in downtown Saigon to shoot the breeze over tall glasses of cà phê đen. Evenings in the city are the perfect time for local youths to venture out of their hiding for a rendezvous over blended beverages at one of District 1’s hippest cafes.

In Saigon, more often than not, one does not simply đi cà-phê just to have coffee, and local cafes are not merely venues that serve coffee. They’re crucial parts of a city ritual that has existed since the French introduced the beans to Vietnam in the 19th century. Đi cà-phê can be as much of a personal habit as it is a social experience. 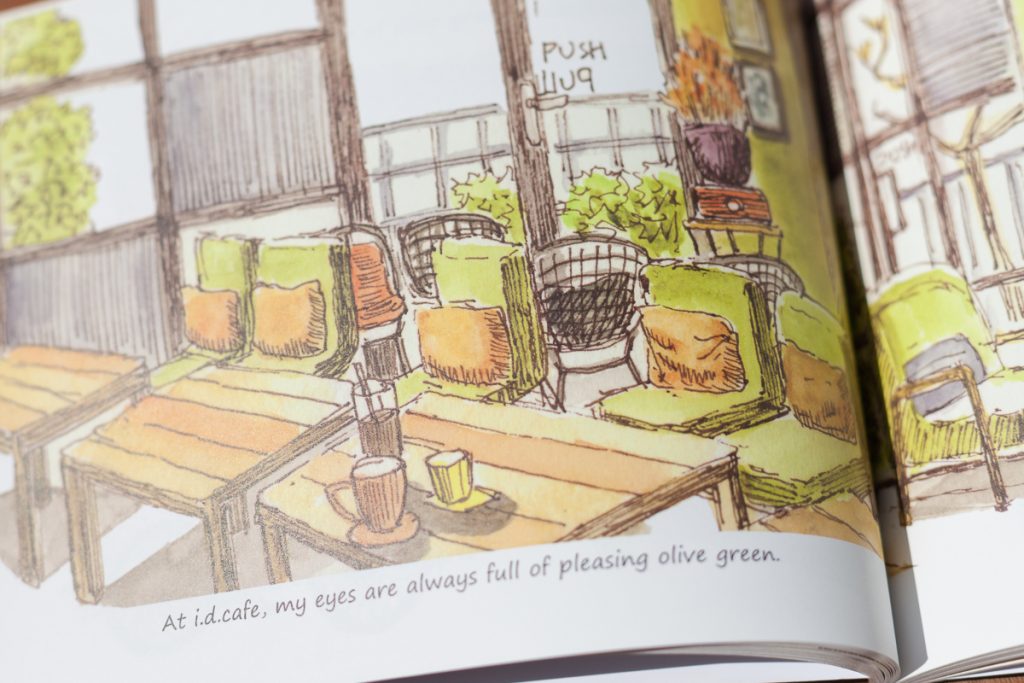 Taiwanese writer and illustrator Shao-Chen Lin belongs to the former group, whose đi cà-phê routine entails quietude, good music and ample time for sketching, as well as personal reflection. Lin is no stranger to on-site doodling, having pursued the pastime on numerous occasions while traversing the landscapes of Asia. However, it wasn’t until a trip to Saigon in November 2015 did the idea of sketching in local cafés come about.

“I stayed in Saigon for about one week, and during this period of time, I just sketched around cafes in Saigon, without other particular sight-seeing plans,” Lin told Saigoneer via email. “I enjoyed the process so much, and since there are still so many cafes to sketch, I will definitely come visit Saigon again.”

In On-the-spot Sketching at Cafes in Saigon, Vietnam, through Shao-Chen Lin’s portrayal, the city’s hidden cafes take on a dreamlike, whimsical quality not unlike the setting of a children’s animated series à la the Craig McCracken-produced Foster’s Home for Imaginary Friends or Ludwig Bemelmans’ Madeline. The slew of hand-drawn sketches that make up most of the book might look simple at a glance, but they’re the result of hours of work from Lin, both on-site and afterwards. 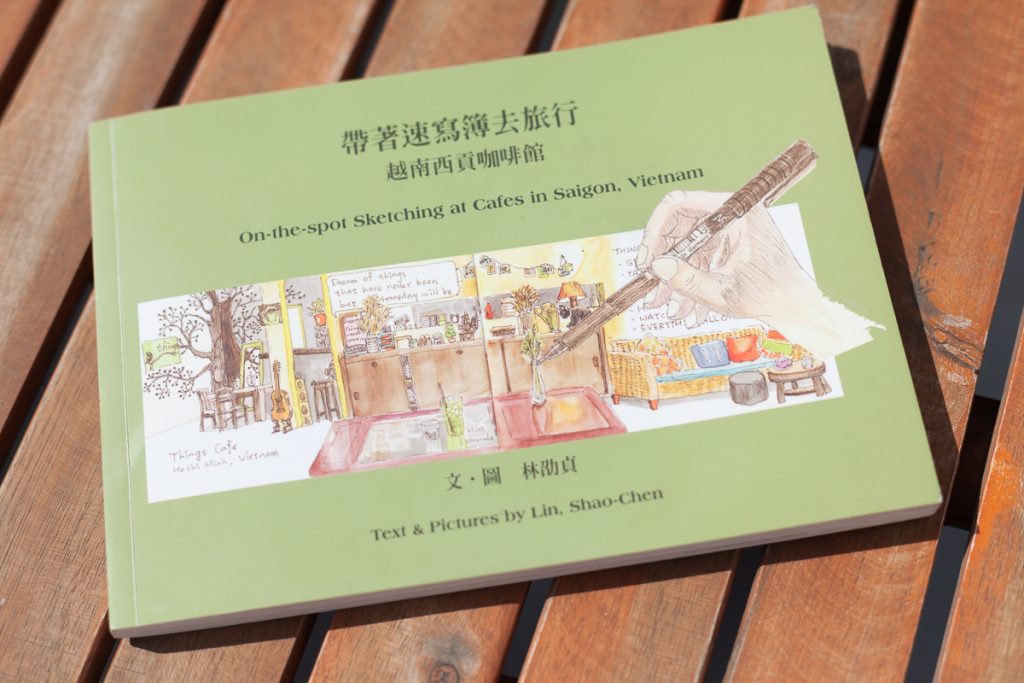 Once Lin settled into a comfortable corner in a café of her choice – such as Phu Nhuan’s airy The Open Space or Ton That Dam’s secluded Things Café – she would spend about two hours sketching the interior of the venue before outlining the drawing with her water-proof pen.

“I love to pay attention to and draw details; that’s what reflects the thoughts and philosophy of the café owners,” Lin explained. “Sometimes I will do some light watercolor to mark the tone and atmosphere, and most of the time I will color the sketches in great details after I went back to my homestay or even after I returned to my home in Taiwan.”

Over the span of a week, the Taiwanese illustrator paid a visit to the majority of Saigon’s most well-known cafés. And with every place she went, an intricate sketch with sharp black lines and soft watercolor was born. Readers familiar with the city’s cozy group of indie coffee shops might recognize their favorite hangout spot, rendered in Lin’s distinctive Taiwanese style. Places such as Ngoi Nha So 7, Gac Hoa and Mockingbird are all featured in her book, with personal thoughts from the author accompanying the sketches.

For Lin’s part, her favorite spot in the city is Things Café, an elusive joint nestled deep down the corridors of an old apartment building on District 1’s Ton That Dam Street.

“I remember that mid-week afternoon when there were not many other guests, I sat there sketching, sipping my mint lemonade, and listening to music from The Best Audiophile Voices,” she reminisces.

Vietnam’s coffee culture is both an indispensable part of local life and a significant draw for tourists to the country’s metropolitan areas. For lovers of Saigon’s coterie of indie cafés, the charm of these hidden havens lies in their location and sense of personality, more often than not brought to life by their owner’s character traits.

“I am particularly fond of the fact that in Saigon you could find cafes in all kinds of locations, whether it’s a French-colonial building or an old and deserted business building, or even a backyard of some local people’s houses,” Lin said of her fondness for the city’s coffee shops.

In Saigon, đi cà-phê can take on a simple or complex meaning, depending on its user’s own personal preference. A city café can be a salon for high-brow intellectual battles of the mind or a cozy date-night nest for local lovebirds.

For Lin, a trip to a coffee shop is the perfect occasion to exercise her favorite hobby of delving deeper into the local coffee culture. More often than not, it’s also time for an adventure: “Some of the cafes I went to were difficult to find, but most of them were worth spending time finding. And the process of finding those cafes was like a fun adventure.” 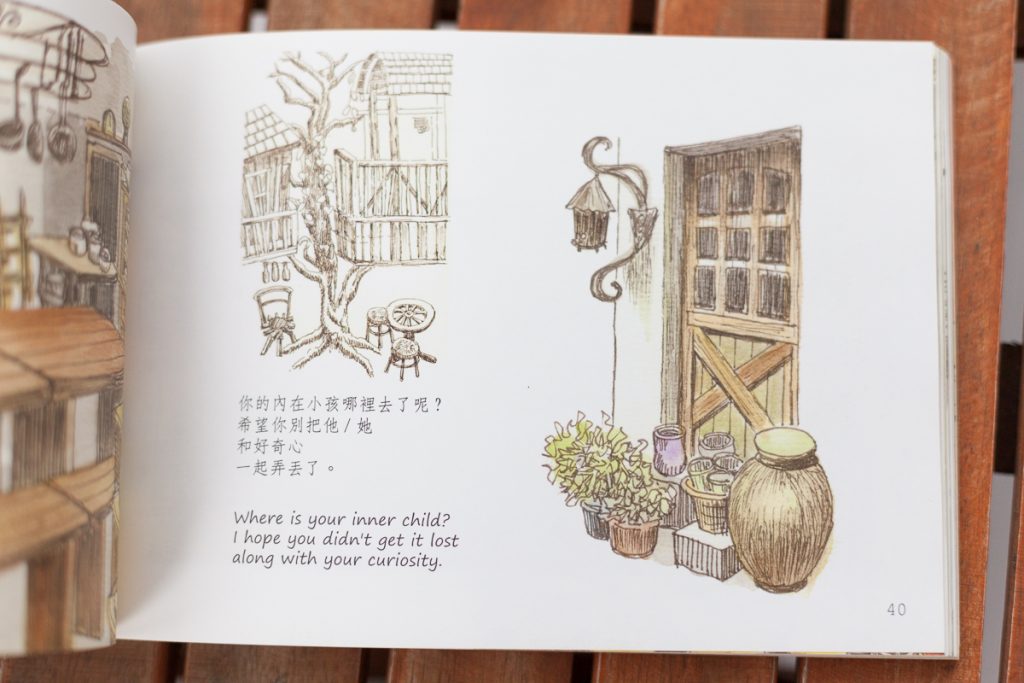 Shao-Chen Lin’s book, On-the-spot Sketching at Cafes in Saigon, Vietnam, is currently available at some independent bookstores in Taipei for US$16. 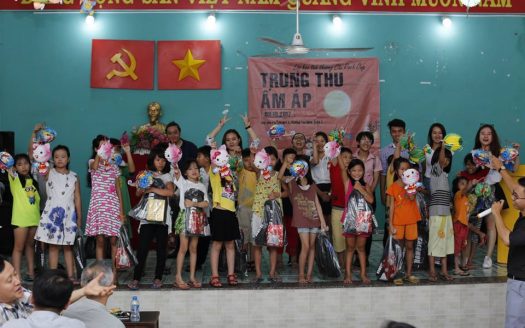 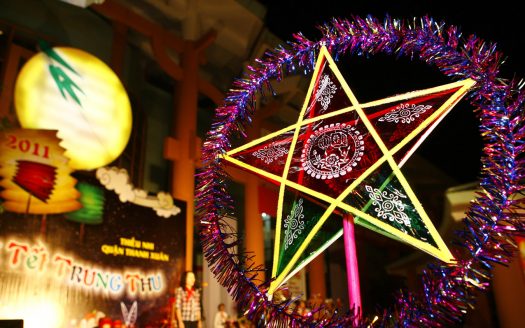 Oct 04, 2017
Tet Trung Thu, as it is known in Vietnam, or the Mid-Autumn Moon Festival as we refer to it in America, is a wonder ...
Continue reading 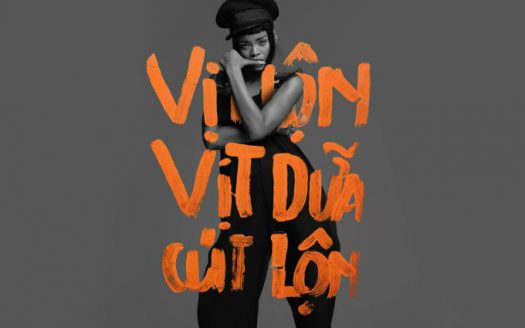 When Adele and Sam Smith break into the cool...

Feb 25, 2017
They say art is everywhere. This artist/fanboy has proved it. Saigon streets have always been a paradise of cool ty ...
Continue reading
Some Nice Welcome Message
Sign into your account
Create an account
Reset Password
Register here! Forgot password? Back to login Back to login